Incoming New York Fed President Williams highlighted three factors behind shifts in the natural rate – real interest rate expected to prevail when the economy is at full strength: demographic changes, shifts in productivity growth, and demand for safe assets. Commonly referred to as r-star, President Williams sees natural rate as a result of longer-term economic factors beyond the influence of central banks and monetary policy, and its decline can thus be attributed to the following changes:

As a result of these “policy-insensitive” factors, President Williams argued that a decline in natural rate would argue for a change in policy goal post and adopt a more dovish reaction function in order to “cope” with a low r-star:

“Incomes have remained flat for many Americans over the last two decades, but housing costs have soared. So between 1995 and today, median asking rents have increased by 70 percent, adjusting for inflation. So there’s a shrinking gap between what families are bringing [in] and what they have to pay for basic shelter.”

Under this new housing crisis, “more people are giving more and more of their [stagnant] income to rent and utilities,” and a FT noted that the benefit of asset price appreciation have concentrated in a narrower segment of the population:

Similarly, the top 10% of households own 84% of stock market wealth, meaning central banks’ easing measures have accelerated asset price appreciation to leave those without assets falling further behind. New York Fed Director of Research Beverly Hirtle echoed this view in her recent remarks:

“Household formation and transitions from renting into home ownership are much lower than their pre-crisis levels, especially among the young — meaning fewer young people have benefited from the increase in house prices.”

Coupling housing affordability with household fertility decisions, Federal Reserve Board Senior Economist Lisa Dettling and University of Maryland’s Melissa Schettini Kearney recognized housing is a major cost associated with child rearing, such that short-term increases in house prices lead to a decline in births among non-owners and a net increase among owners. Putting their research in perspective, especially in respective that people under the age of 45 now holds only 14% of America’s housing wealth, further increases in housing prices would likely increase economic hardship of young renters (who have relatively fewer asset) to perversely dampen labor force growth in the years to come – a factor President Williams acknowledged as a catalyst to a lower natural rate.

“…there is a U-shaped relationship between firms’ productivity and debt, with both high-productivity (“gazelles”) and low-productivity (“zombie”) companies having high debt ratios. Higher interest rates hit both types of company and so the net effect on productivity is an empirical question.”

“If we assume all firms have the same solvency threshold, more of the firms going bust are zombies than gazelles – there is more creative destruction than destructive destruction.”

While Haldane quickly dismissed the benefit of using tighter monetary to induce productivity gain, the logic is evident – ultra-accommodative monetary policies which kept long-term interest rates (and term premium) depressed over the medium term would allow zombie firms to stay viable for longer (thus reducing aggregate productivity). This illustrated the policy difference between President Williams and Chief Economist Haldane, and the thesis that monetary policy do not influence productivity is now facing heightened scrutiny.

Similar to Haldane, Bank for International Settlements Head of the Monetary and Economic Department Claudio Borio noted that credit boom would misallocate resources toward lower-productivity sectors, and easing bias by monetary authorities would also exacerbate the intensity and disruptiveness of financial cycles to weigh on productivity:

“Drawing on a sample of over 40 countries spanning over 40 years, we find that credit booms misallocate resources towards lower-productivity growth sectors, notably construction, and that the impact of the misallocations that occur during the boom is twice as large in the wake of a subsequent banking crisis.”

“The emergence of monetary policy regimes focused on near-term inflation control meant that policy would be tightened during financial booms only if inflation increased but would then be loosened aggressively and persistently during busts.” 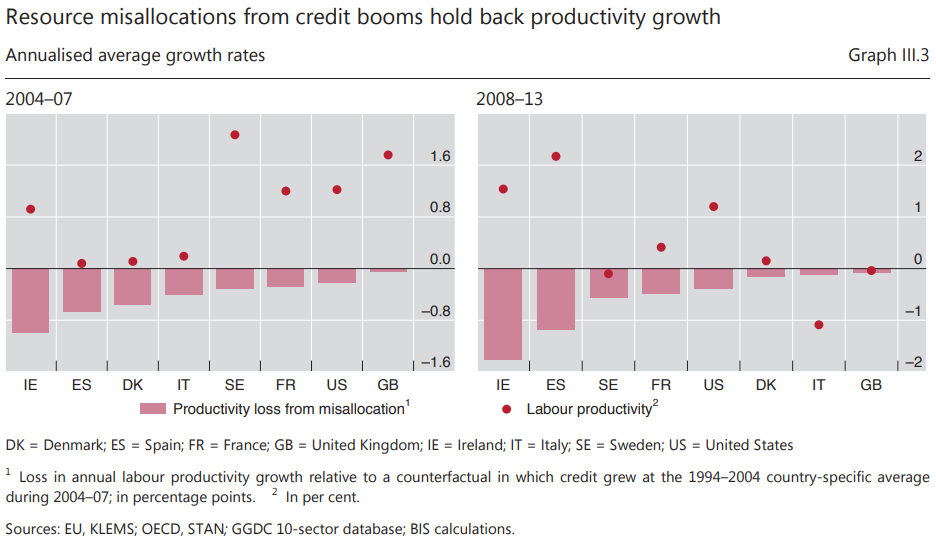 Impacts of unproductive “zombie” companies be gleaned from the faltering (but once high-flying) start-up Theranos – the company took in $1.4 billion from eager private equities, venture capital firms and high net-worth individuals. Aware of their products’ limitations, the company’s founders used investor cash to secretly modify third-party commercial machines to pass outputs as their own.

Concerned that a visiting U.S. official would see the modified commercial analyzers in their lab, the founders again used yield-seeking investors’ cash to create a fake lab to generate high praises from officials and optimistic investors.

As prolonged policy accommodation dampen real returns, yield-seeking institutional investors have backed numerous companies such as the once-celebrated Theranos in hopes of fostering high-return “unicorns.” Many of these firms have yet to release a working product despite consecutive funding rounds, and their existence is consistent with Haldane and Borio’s thesis that policy easing would worsen resource misallocation and enable non-productive companies to survive for longer, thus weighing on aggregate productivity.

Natural rate as an ever moving goalpost subjected to policy influence

BIS’ Borio noted that monetary policy may have a longer-lasting impact on real rates than commonly assumed (contrary to Williams’ thesis), and it may not be helpful to think of market rates as tracking natural rates that are independent of monetary policy:

“The decline in real rates over the recent standard sample could be attributed to the combination of three factors. The first factor is the gradual normalization of interest rates after the Volcker shock that ended the Great Inflation, which saw interest rates rising from peacetime troughs. This suggests that the starting point is rather unrepresentative and already embeds a key monetary policy imprint.”

“The second factor is an asymmetrical policy response to successive financial and business cycles in a context of prevailing disinflationary tailwinds linked to globalization. In particular, asymmetrical responses were in evidence around the financial boom and bust of the 1980s–90s and the one that surrounded the GFC. As long as inflation remained low and stable, there was no incentive for central banks to tighten policy during the financial booms that preceded financial strains in both cases. But there was a strong incentive to respond aggressively and persistently to fight the bust and stave off any deflation threat.”

“The third factor, especially post-GFC, is the strenuous central bank efforts to push a stubbornly low inflation rate towards target as the disinflationary tailwinds before the crisis turned into unwelcome headwinds after it. Difficulties in generating second-round effects, with wages chasing prices, would imply that reductions in interest rates have a largely temporary effect on inflation. Thus, repeated cuts would end up reducing real interest rates further and further even as inflation remained persistently below target.”

Thus, with real interest rate a central component of natural rate, which is considered by Williams and other policymakers as a policy guidepost, monetary policy easing that dampens real interest rate would also lower r-star, thus leading to a scenario where easing begets further easing (which is reflected in Williams’ argument that low natural rate would imply more reliance on unconventional policies) as each policy measures would induce a corresponding shift in the “goalpost.”

As a result, major factors cited by President Williams as catalysts behind a “new normal” low r-star and justifications for relying on unconventional policies are in-fact influenced by monetary policy itself – easing begets further easing, lower r-star begets lower r-star. Under this framework, effective policy normalization (via higher long-term interest rates) would reduce policy distortion and unexpectedly lift estimates of the natural rate.

By underestimating the costs of prolonged expansionary monetary policy and distortions on productivity and real interest rates, as well as social costs as a result of rising inequality, policymakers are also underestimating vulnerabilities of a credit-fueled economic growth to rising volatility; furthermore, policy-induced social discontent behind anti-establishment, anti-globalism policies would boost reflationary and “quick-fix” fiscal policies.